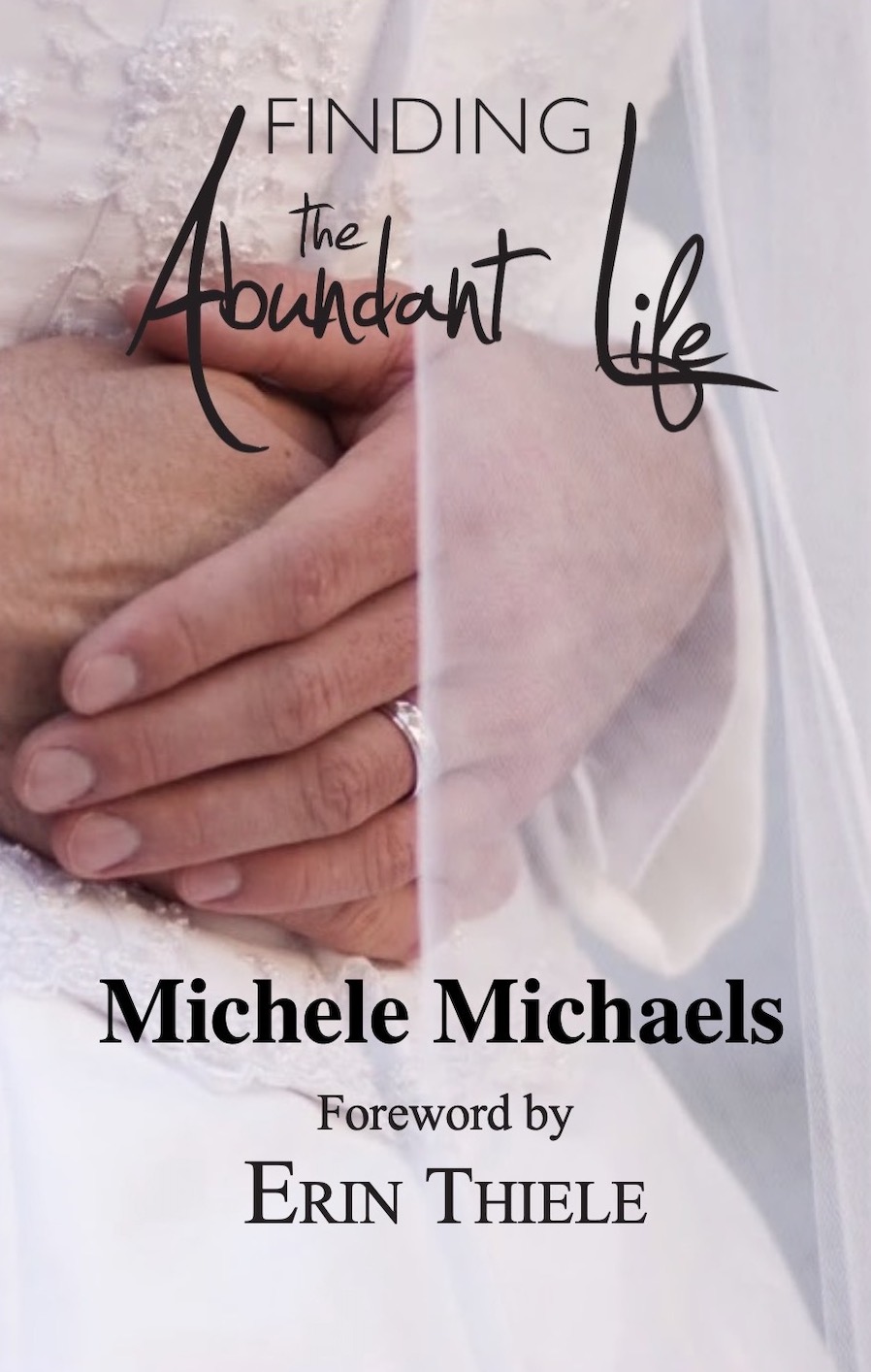 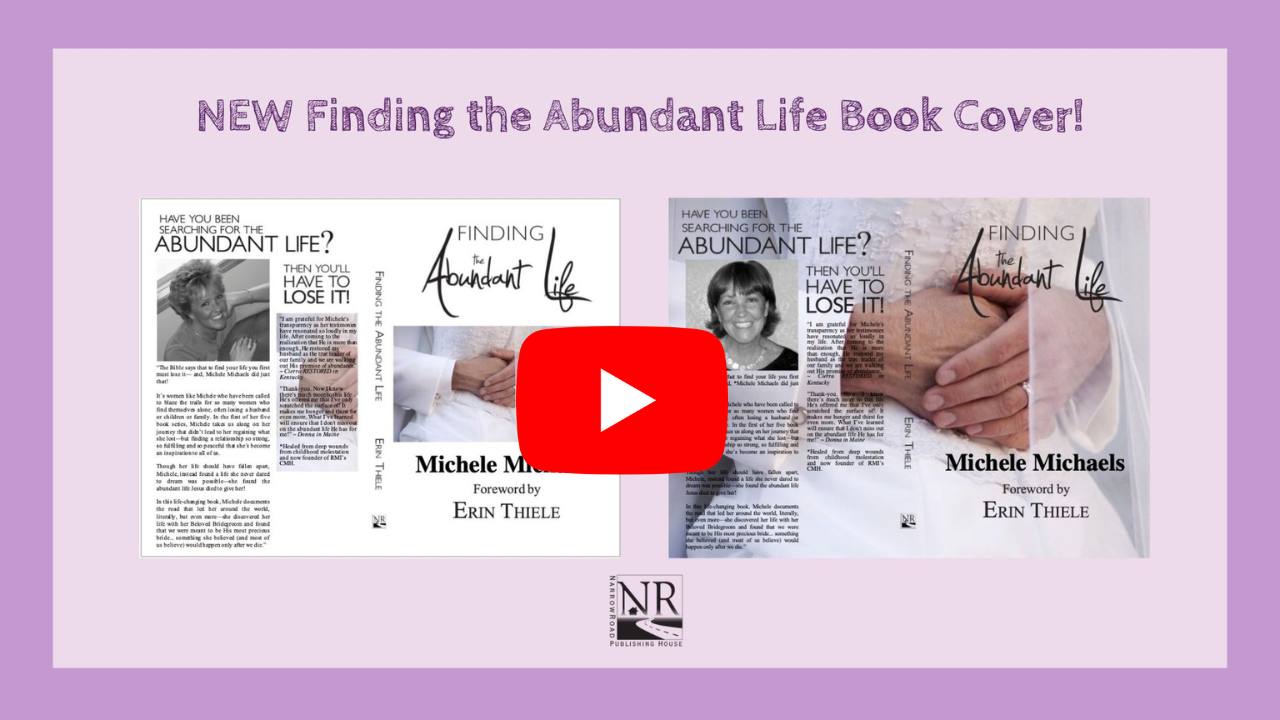 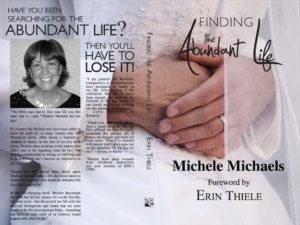 HAVE YOU BEEN SEARCHING FOR THE ABUNDANT LIFE? THEN YOU'LL HAVE TO LOSE IT!

“The Bible says that to find your life you first must lose it— and, *Michele Michaels did just that!

It’s women like Michele who have been called to blaze the trails for so many women who find themselves alone, often losing a husband or children or family. In the first of her five book series, Michele takes us along on her journey that didn’t lead to her regaining what she lost—but finding a relationship so strong, so fulfilling and so peaceful that she’s become an inspiration to all of us.

Though her life should have fallen apart, Michele, instead found a life she never dared to dream was possible—she found the abundant life Jesus died to give her!

In this life-changing book, Michele documents the road that led her around the world, literally, but even more—she discovered her life with her Beloved Bridegroom and found that we were meant to be His most precious bride... something she believed (and most of us believe) would happen only after we die.”

“I am grateful for Michele's transparency as her testimonies have resonated so loudly in my life. After coming to the realization that He is more than enough, He restored my husband as the true leader of our family and we are walking out His promise of abundance.” ~ Cierra RESTORED in Kentucky

"Thank-you. Now I know there’s much more to this life He's offered me that I've only scratched the surface of! It makes me hunger and thirst for even more. What I’ve learned will ensure that I don't miss out on the abundant life He has for me!” ~ Donna in Maine

*Healed from deep wounds from childhood molestation and now founder of RMI’s CMH.

About five years ago, I was walking from my bathroom to my bedroom when suddenly I was overtaken by a 'knowing' that my daughter was on the verge of dying. The Lord asked me what I would choose. I felt extremely humbled and told Him that He should choose because I didn't know what was best for her and her condition.

My daughter had been bound by addiction for over 10 years. She was not in our home. I told Him I just couldn't take seeing (or hearing about) her this way anymore. He was kind enough to turn my heart “The Lord turns the heart wherever He wishes . . .” (Prov. 21:1) so that I wanted no contact with her so I could actually survive the ordeal.

Having Him choose for me started about five years ago, when I was out gardening at our last house, my EH approached me and challenged me to choose him or her after what had happened the previous week. We'd been woken up to someone in my daughter's bedroom with a gun. So when my EH asked, I stood stunned and went inside and up into my room. I asked the Lord to choose for me.

The next day my laptop was gone and other items. Yet, instead of being upset, I was elated. He was not done with her yet, and this led to Him taking her out of our home.

We had spent countless hours of rehab, court hearings, and would have had to pay $100's of thousands for in-patient care if it were not for the Lord prompting my EH about insurance.

However, NONE of it worked. She kept leaving the facilities. It was like a game to the one that was controlling her. Mocking, threatening, physically and otherwise. I am sure a few of you have experienced something similar or heard of how this vicious cycle is an ongoing nightmare.

Then, when I had surgery in 2014 it felt like the right time to bring her home. However, it was not. She was here from Spring to mid-autumn and she didn't come alone, there was someone she was still attached to. The EXTREME FIGHTING and abuse continued. Finally, my EH told them they had to submit to a drugstore drug test. They both refused so my EH asked them to both leave.

They left and spent the next couple years on the streets.

I finally got a call in or around summer 2016 that she needed a ride to a counselor. She had been ignoring mental health issues for years and my EH had been telling her that meds could help. No different than having high blood pressure or low blood sugar, it would be a good place to start.

So I went out to give her the ride. I had just received the Finding the Abundant Life book and I offered it to her. She actually started to read it and understand what it said and it was from this book along her own restoration when everything finally started to take hold.

Soon after, my daughter moved back home, got her license, got a job, got new friends and a new life! We are currently asking the Lord to wipe out her $1000's of dollars of court debt that has piled up and trust He will.

I sometimes wonder what would have happened if I would have just let go years ago, if it would have happened sooner. But I try to reject those thoughts, because, throughout this whole thing, He remained faithful, it all went along the way it did, and now I have a restoration story to share with all of you!!!

Jeremiah 31:16 KJV "Thus saith the Lord; Refrain thy voice from weeping, and thine eyes from tears: for thy work shall be rewarded, saith the Lord; and they shall come again from the land of the enemy.